Story by Judith O. Etzel, contributing writer at The Derrick & The News-Herald
Photos by Richard Sayer

It’s one thing to make the pitch that young people should seriously take advice to come back home to live and work.

It’s quite another to have up-close and personal examples of people who have done just that.

“What are your passions and how are you developing them both in your career and in your life? Here’s a way – find your career and bring it back home,” said Heather Motter, an English teacher at Cranberry High School, as she introduced what she described as “perfect examples” of that journey to her senior students on Tuesday.

In a program designed to encourage students to consider careers, starting businesses, getting involved and more, local residents Corey McCullough and Ashley Cowles offered glimpses into their stories and reflections on why they chose to return home.

Both are Cranberry High School graduates who had Motter for a teacher. 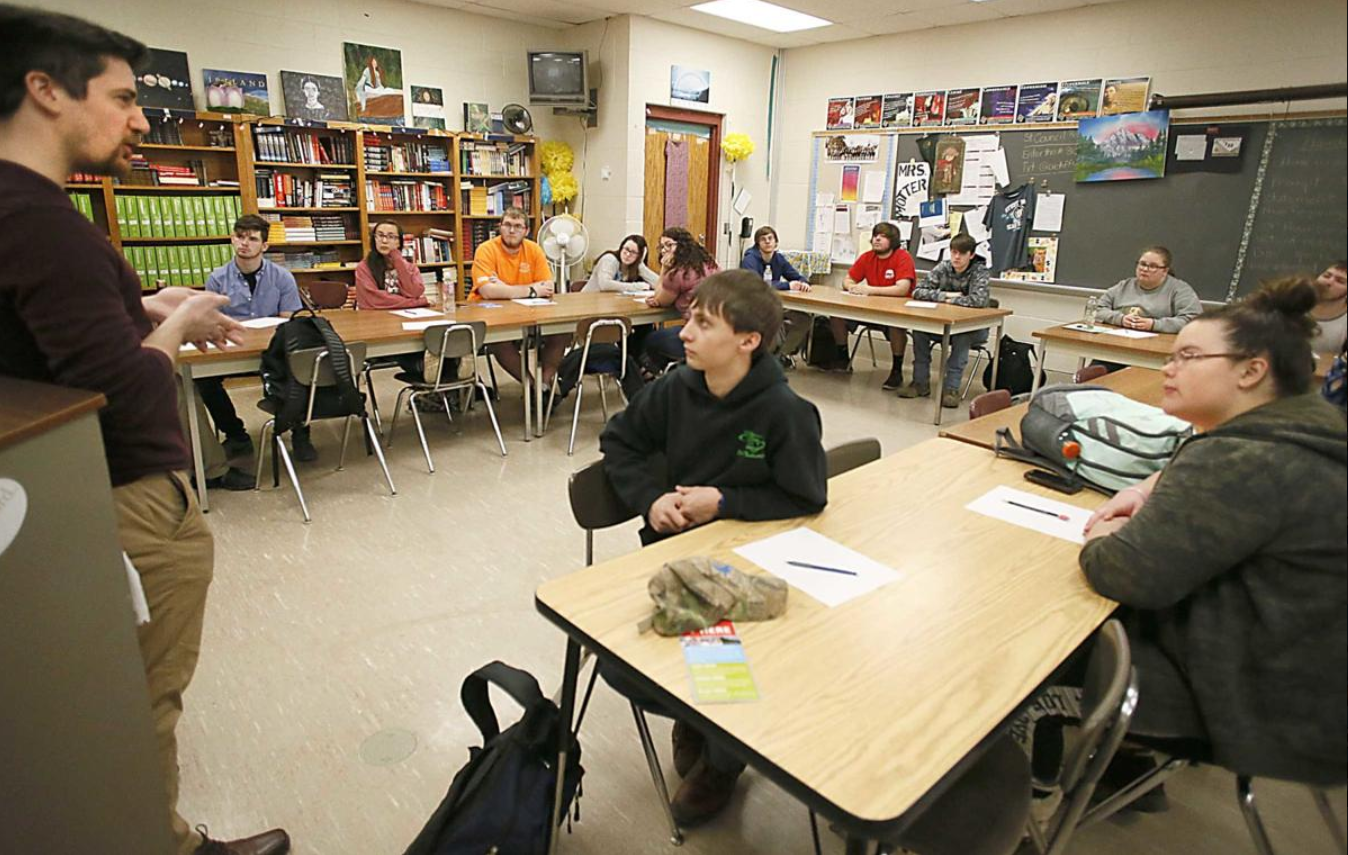 McCullough, a 2010 Clarion University graduate who majored in anthropology and history, owns C.B. McCullough Editing and Proofreading and has written young adult epic fantasy books – “The Fallen Odyssey” and “The Fallen Aeneid” in a trilogy with the final edition nearly completed – as well as “A Knife in the Dark” – a science fiction thriller.

Cowles, a 2016 graduate of Kent State University with a degree in communications, is employed by the Venango Area Chamber of Commerce and works as program director of the Be Here (beherevenango.org) initiative. It is that program, one that champions the area as “a place to live, work and play,” that underlined their presentations to Motter’s students.

You can live, work and play here

“There are opportunities here that I wouldn’t have elsewhere,” said Cowles. “I love the sense of community … and while what I can do I can do anywhere, it’s a bonus to be here.”

McCullough told the students he discovered a passion for writing while sitting in Motter’s English class years ago.

“I was in the class and really didn’t want to be be there. So I started to think of what it would be like to wake up in an alternate world. It was then I found the theme for the book I would later write. And I pursued that passion and brought it home,” he said.

Cowles, who believed as a high school student that eventually she would “move away from here,” said she developed an interest in food and wellness while in college, developed a blog on those subjects and, upon graduating, took an internship position at the Chamber office.

“I followed my passion and opened my business here. I believe you can live, work and play here and be successful,” she said. “It works for me.”

For McCullough, his choice to be self-employed and working online has drawn customers from across the globe.

“I copy-edit, proofread, ghost-write and more for people. So I used my passion to create a business. And I chose to do it here,” he said.

Both Cowles and McCullough belong to a group known as FLEX, an acronym for Future Leaders and Entrepreneurs Exchange, which is composed of young professionals living in Venango County. There are 110 members in FLEX. 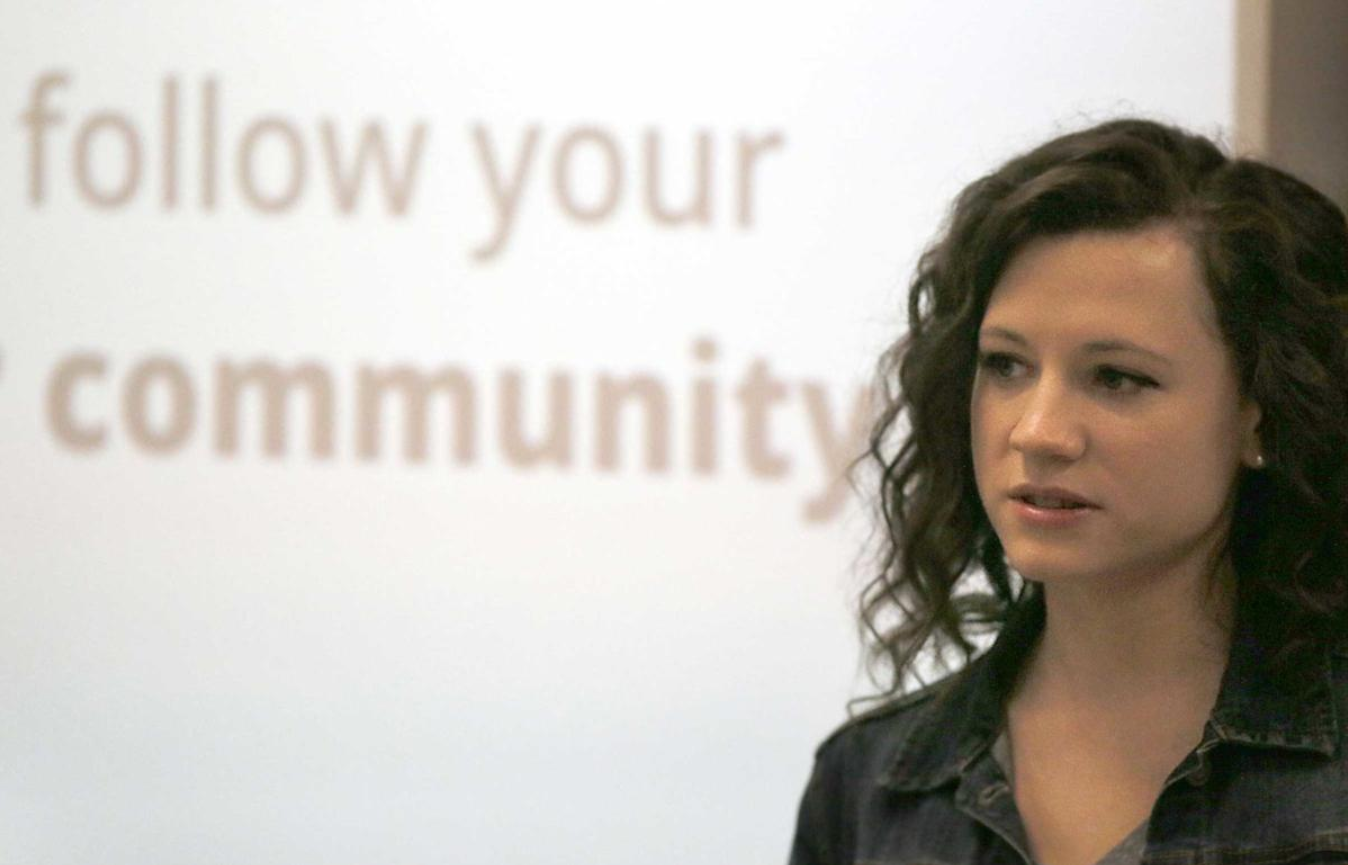 “There are lots of success stories there. Many young people are doing great things in our community,” said Cowles. ” … Hardworking, creative, flexible, community-minded, determined, personable – those are the traits you need.”

McCullough, who said he lived for a while in West Virginia before moving back home, said the desire to flee your hometown can be found in all communities.

“Every town is somebody’s hometown,” he said. “… With the changes in jobs, and the Internet, I see those hometowns may be in for a resurgence and we’ll see more young people come home.”

Several senior students said they are working on projects that reflect their interests. The efforts include virtual film tours of local industries to draw new employees, videos of outdoor activities available in the region, graphic design projects, hands-on experience in the building trades and more.

In suggesting Motter’s English students “follow your passion” in careers, community involvement, volunteerism in their hometowns as well as other venues, Cowles advised them, “Recognize local opportunities. Make connections and get involved. And take the next steps.”

Return to All News & Events