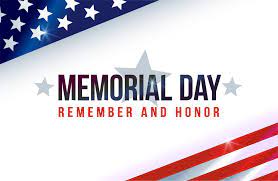 Memorial Day will be observed Monday in Franklin with three services and a parade downtown. A memorial service for U.S. Navy veterans will be held at 9 a.m. on the 13th Street Bridge in Franklin. This will be followed by a
service in the Franklin Cemetery at 9:30 a.m. The community service at Franklin’s bandstand in South Park will begin at 11 a.m.

The names of veterans who have died over the past year will be read aloud at this service. The parade will start at 10 a.m. with lineup starting at 9 a.m. The VETS Honor Guard is in charge of the community service and the parade with
Chuck Benedict serving as parade chairman.

The parade will begin at Railroad and 13th streets and proceed north on 13th Street to Liberty Street, where it will turn right onto Liberty. It will end at the Venango County Vietnam Veterans Honor Roll at South Park Street.