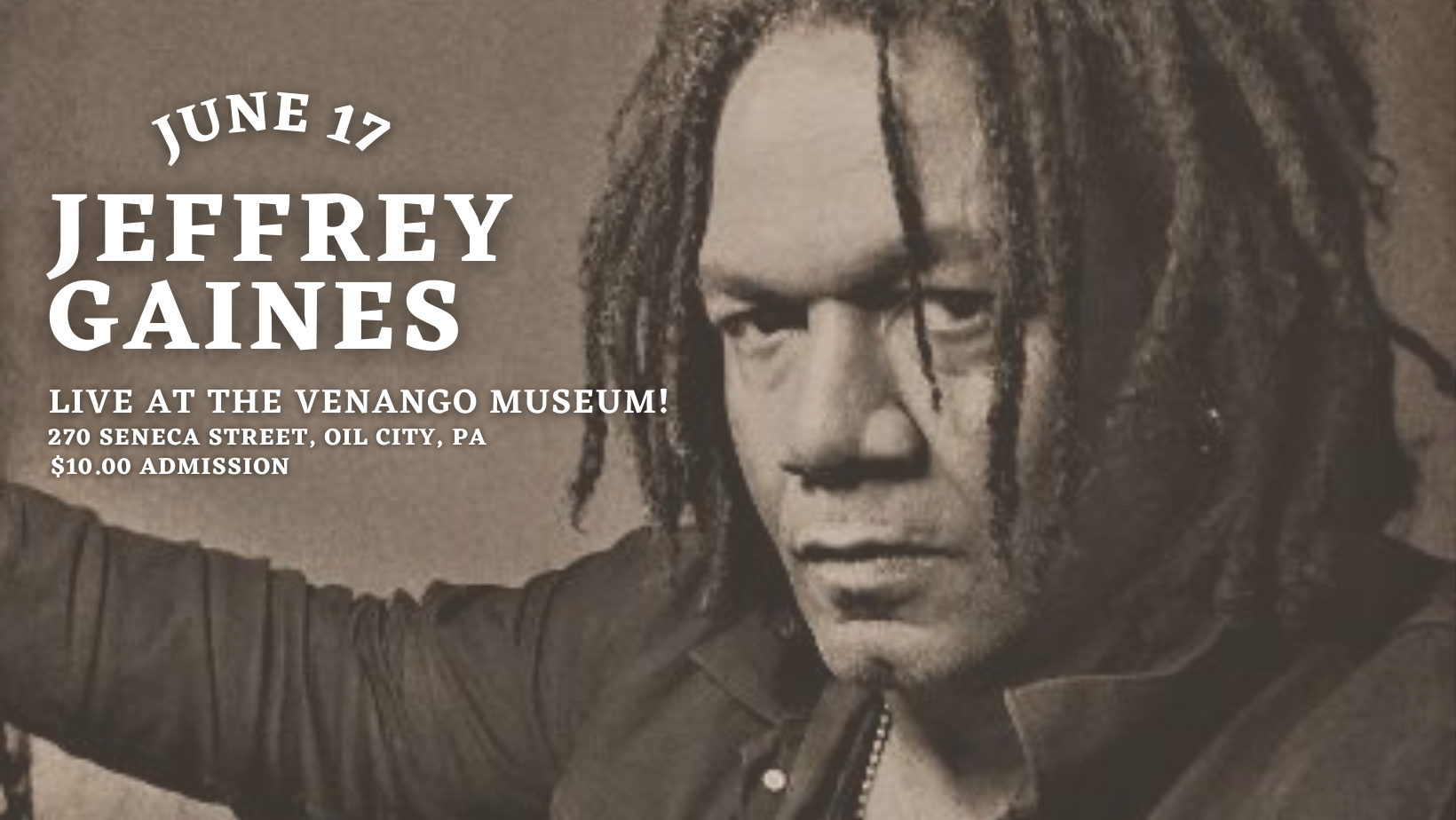 Jeffrey Gaines will perform at the Venango Museum on Friday, June 17, 2022 at 7PM! Jeffrey Gaines has been heralded for his soul-searching lyrics and his powerful live performances. With only his voice and a guitar for accompaniment, Jeffrey Gaines has earned a reputation as a captivating performer, entertaining audiences everywhere he goes.

Raised in Harrisburg, PA by parents more inclined to spin soul classics by Aretha and Otis than the New Wave and Brit Rock blasting from their son’s room, a teenaged Gaines began singing and playing guitar in several local garage bands. He soon decided to set out on his own and quickly landed a record deal, releasing Jeffrey Gaines, the first of his five studio releases. The album garnered four stars from The Philadelphia Inquirer, describing Gaines as “…an ethereal soul…insistent, impassioned, full of self-knowledge.” Somewhat Slightly Dazed, and Galore followed. Interview Magazine called Gaines’ music “soul-searching” and “refreshingly free of jargon, sentiment or cliché.”

Jeffrey Gaines released Always Be (Artemis) to both critical and commercial praise. Featuring his emotional interpretation of “In Your Eyes” and his own soaringly beautiful “Always Be,” the album hit #5 on R&R Callout America CHR/Pop list, also reaching #45 on the Billboard Heatseekers Chart. The New York Post proclaimed Always Be as “a dozen-song mix…that completely illustrates the depth he is capable of.”

Gaines’ impressive catalogue grew with Toward The Sun, produced by Mitchell Froom (Elvis Costello, Bonnie Raitt, and Crowded House). The Boston Globe declared that “Gaines’ soulful, wounded vocals make a case for his being one of pop’s finest singers…an artist who deserves far more attention than some of his more hyped, yet less talented peers.” Mojo noted, “This established soul-folkie’s sexy growl has an underlying edge, making it a memorable album. Heartfelt unpretentious.”

Throughout his career, Gaines has built a rapport with his fans unlike any other in popular music today. Gaines goes as far as letting his fans influence the songs he performs each night. “When it’s just me playing, I only know the first song I’m going to play, but from there the energy and the vibe tell me what the next song is going to be. Someone may yell a song, and I’m like ‘Exactly! Good call.’ That’s so fun to me, keeping it exciting and spontaneous. I don’t even know what’s around the corner, and the crowd doesn’t either.” Based on that relationship with the audience, Gaines released Jeffrey Gaines Live (CD / DVD) followed by Live In Europe, which was recorded during his 25-city tour with Joe Jackson. JG’s 2016 return to Europe will be accompanied with long-awaited new music, with a release to follow in early 2017.

Admission is $10 per person at the door. Concert starts at 7PM. Light refreshments will be served.